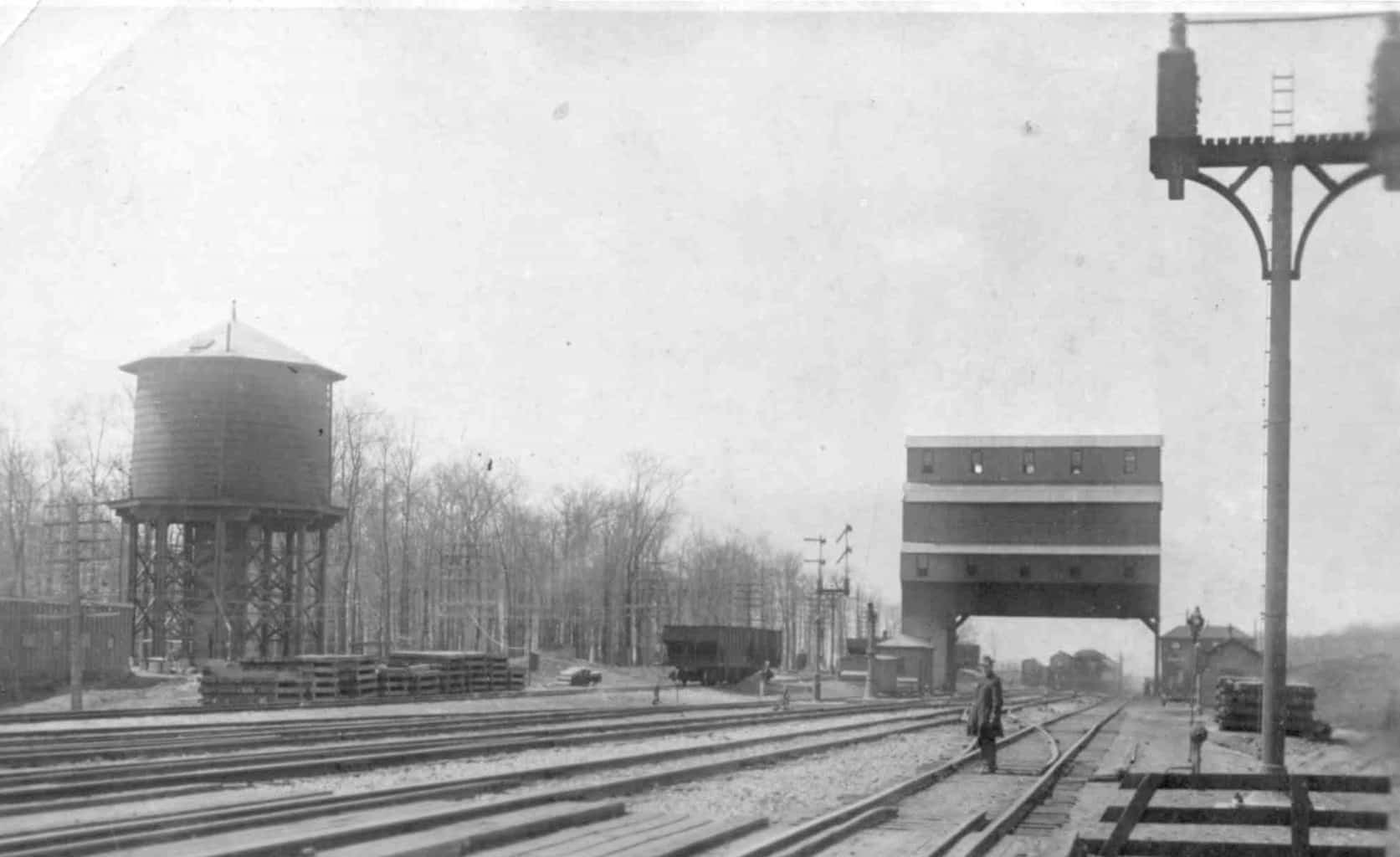 The Village of Edgerton was surveyed where the proposed Michigan Southern and Northern Indiana Railroad crossed the St. Joseph River on April 22, 1854. The original plat consisted of 135 lots all on the north side of the tracks with a depot grounds on the south side.

The Village was laid out by John H. Sargent, a civil engineer with the railroad. Mr. Sargent also helped found Stryker and Wauseon.

The Village was named after Alfred P. Edgerton who was born in Clinton County, New York on January 11, 1813. His father Bela Edgerton was an attorney who served in the New York Legislature from 1826-1828.

In 1833 he became editor of a newspaper in Clinton County, New York and moved to New York City.

Mr. Edgerton moved to Ohio in the spring of 1837 to serve as a land agent for Hicks and Company and the American Land Company which both owned large amounts of land in the area which they wanted to sell to settlers. He built a house in Hicksville and lived there many years.

In 1845 he was elected to the Ohio Senate. After this, he served two terms in the U.S. House of Representatives.

Why is Edgerton located where it is? In the 1850’s roads were very bad – not like those of today. The roads were little more than dirt trails and were often seas of mud making travel difficult and the auto did not exist.

What Mr. Sargent and others who were privy to a proposed rail route would often do was to purchase pieces of land about every ten miles and survey town lots next to the rail route. This made the new town just far enough away from other towns to make a good location for purposes of other manufactured goods by rail to markets in larger cities.

Bryan was the only town in Williams County on the proposed rail route. Mr. Sargent helped locate Edgerton, Stryker, and Wauseon. They, therefore, can be considered true railroad towns.

Edgerton appears to have grown quickly after it was platted. A railroad depot was constructed on the south side of the tracks. The first store was brought to Edgerton by the Railroad Company and afterwards owned by William Hill. The Edgerton Post Office was started June 3, 1854 with Jackson M. Wood as postmaster. In 1855 Daniel Farnham moved his mercantile business to Edgerton and located at the northeast corner of Michigan Avenue and Indiana Street. Joseph Spindler started a tannery and two hotels were soon in operation to cater to the wants of the traveling public and railroad workers.

An oar factory was built about 1860 on the west side of the river north of the railroad. Ash timber from the area was floated down the St. Joseph River or hauled in by wagon or bobsled, converted into oars and shipped out on the railroad.

By 1865 the citizens felt a need for better organization. On September 4, 1865, forty-one residents petitioned the Williams County Commissioners to incorporate the Village. The petition was approved on December 4, 1865 allowing a Village government to be formed. The period after the Civil War was a period of great growth. With plenty of employment available, the population grew from an estimated 270 in 1860 to 690 in 1870 and 782 in 1880.

According to the best available information, the first school house stood where the present Town Hall does now. The next was erected near the northwest corner of Michigan and Indiana Streets. The third was built prior to 1864 west of the Methodist Church on Hull Street and this building was later used as a Masonic Hall.

A telegraph school was run from 1871 to 1923 by Mike C. McGuire. A 1903 newspaper accountant said nearly 300 students have obtained good positions through this school. Young men and women from several states were thoroughly trained to fill responsible positions by this institution.

The Edgerton Church of Christ was organized in 1864 on West Indiana and in 1976 moved to their new house of worship on Laubach Drive. 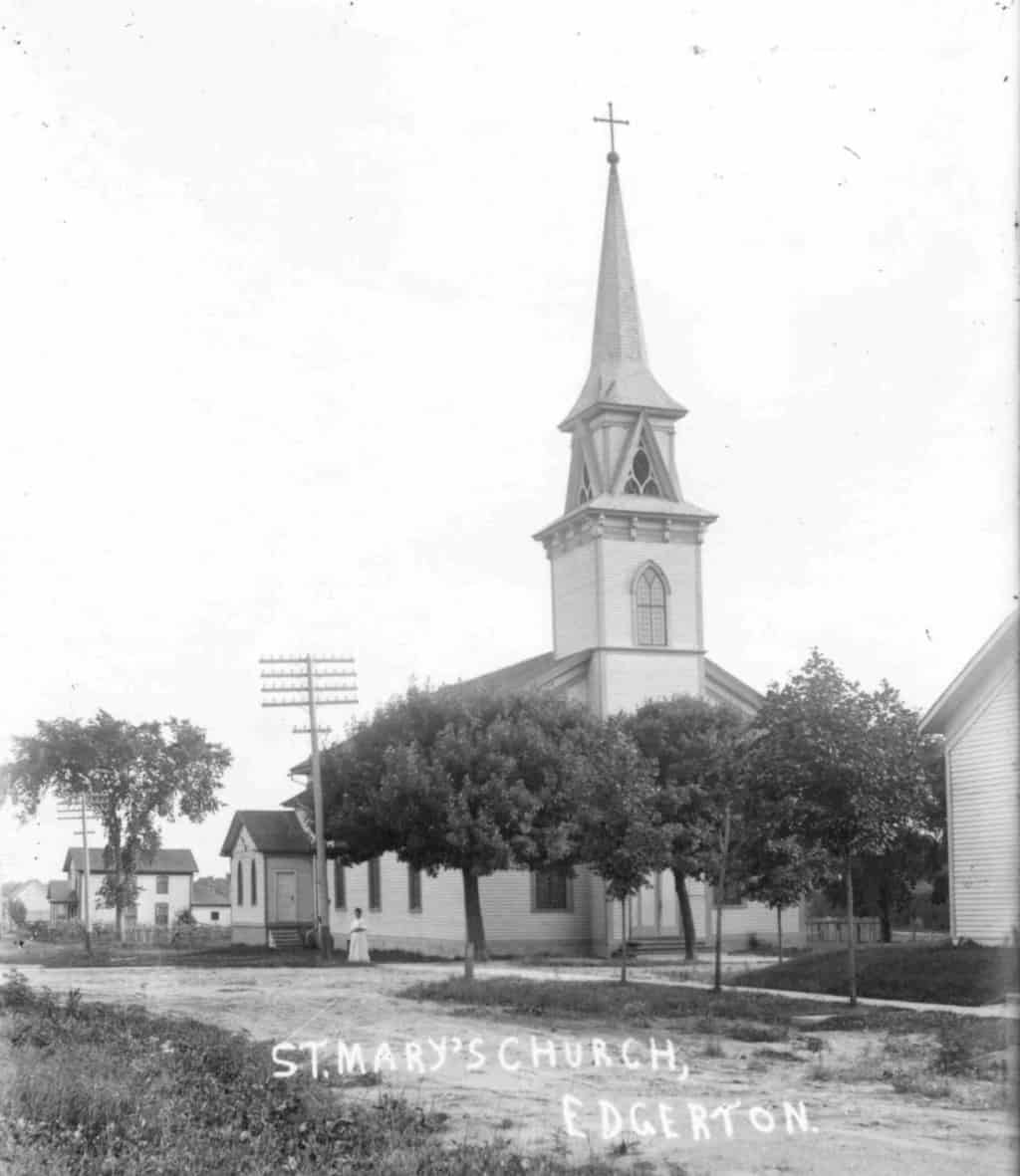 St. Mary’s Church was organized as early as 1853. Their first church was erected in 1866 at Bement and Locust. The present church was dedicated December 21, 1944. The old church was moved and now serves as the Knights of Columbus Hall. 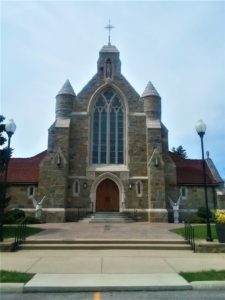 The Village had no town hall for its first thirty years. The present brick town hall/opera house was built in 1884 by Von Behren and Shaffer of Stryker.  In June of 2010 a straight line wind blew down the Town Hall destroying it.  Today the current Town Hall is located at the former High School.

A disastrous fire hit the town in July 1893. Soon afterwards the Village purchased a hand pumper from Bryan and the Edgerton First Department was founded on November 20, 1894.

The town’s first street lights were kerosene lamps on posts. The town hired a man to light them in the evening and extinguish them in the morning.

The first telephones were installed in 1899 and our own power plant was built in 1903.

The lights were turned on in time for the dedication of the existing Methodist Church on May 17, 1903.